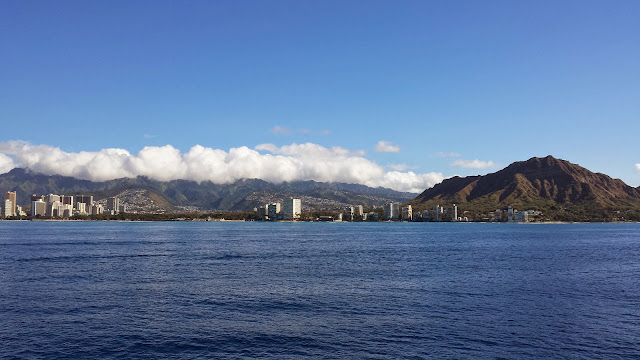 I met Grace floating in the condo pool this afternoon.   She remarked that it was not a bad place to be on a hot summer afternoon, but she would sooner be in Honolulu.  I returned that I had been there in February and agreed that Hawaii is a pretty amazing place.

Grace explained that she grew up in Honolulu, graduated from High School there, her father was a Naval Officer assigned there.  She grew up in a house on a mountain side near Diamond Head (the picture above.)  She vividly remembers one clear December morning when she was 12, watching a plane with an unusual paint color and big red circles painted on it fly right over her bedroom window. It was December 7th, 1941 and she was a witness to history, the plane was on it's way back out to sea after the attack on Pearl Harbor.

You never know when history will happen in the back yard of your adventure.
Posted by Travel at 6:00 AM