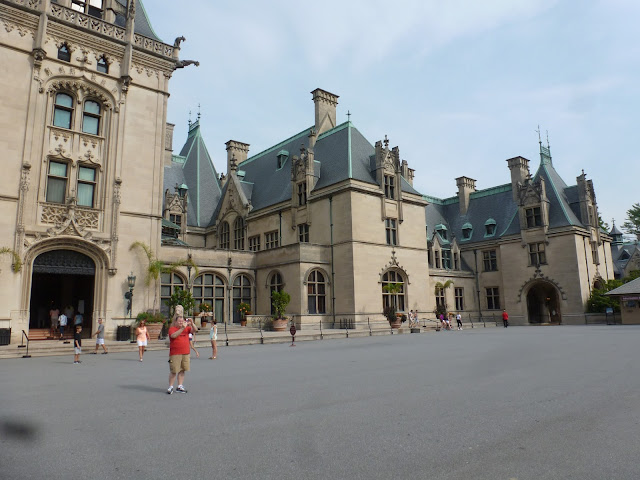 Biltmore, the Vanderbilt estate in North Carolina, was an American attempt to build one of the grand European homes, the French would call it a Chateau, the English a Manner, in the United States.  It is build on a very grand scale, the dinning hall seats over 100 people at one long table.  Yet it feels very much like a home inside.  I like it, I could get comfortable there.

I first visited in the very late 1970's with my two grandmothers.  I don't recall the circumstances, but my maternal grandmother had gone to Michigan for the summer without her car.  I was driving the two of them in my paternal grandmother's car, as a recall a huge Buick.  After my grandfather died she indulged herself in a couple of really nice cars after 50 years of plain-Jane standard cars.  She had a little Lincoln coupe for a couple of years and then decide she wanted a big four-door and bought the nicest Buick in the dealership.

When we were there that trip there was still a section of the house occupied by a member the family.  My paternal grandmother was very impressed with the house and I think shared my feelings of I could get use to living like this, my material grandmother's reaction was simply, "boy am I glad I don't have to clean that."  The difference reflected how the two of them viewed life.   One was an optimist who saw unlimited potential in life and the other was a pessimist who saw her role as the servant of others.
Posted by Travel at 6:00 AM