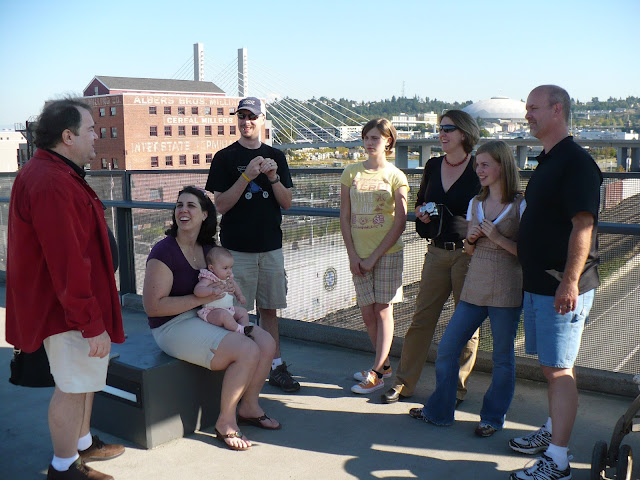 This is the first group of friends that we met through blogging.  Woodchuck (far right) Kel standing in the dark shirt, and Squirrel in the hat, were active bloggers that we met through comments on a blog written by Bert who is an old friend of ours who lives in London.  My introduction to blogging was as a guest blogger for Bert 10 year's when he was on vacation for two weeks.  I remember writing about going to a beauty show for cows on his blog.

The first time I mentioned to my co-workers that we were meeting Woodchuck for dinner and that we only knew him through blogging, by co-workers were convinced I would be found dead the next day.  But as we all know, most blogger are real people, and really good people.  Read their blogs for a few weeks and you kind of know if they are well balanced or not - of they are safe to meet or not.

This picture was take near Seattle in 2008. Woodchuck, Kel and Squirrel lived on the west coast at that time and met us in Seattle when we there to board a cruise to Alaska. Unfortunately all of them have dropped out of the bloggosphere. We read about their adventures on Facebook, but it is not the same.  Woodchuck (aka Bob) and Kel have become good freinds, they now live in northern Indiana and we see them from time to time.  I should let Squirrel know I am going to be in Portland in a  week or so.

And now through the Bloggerpoloza we have met a new and larger circle of friends.  I have seen a couple of you outside of the gathering and I look forward to meeting more.  I have to make it Wales one of these days.