Don't Leave Home Without It! 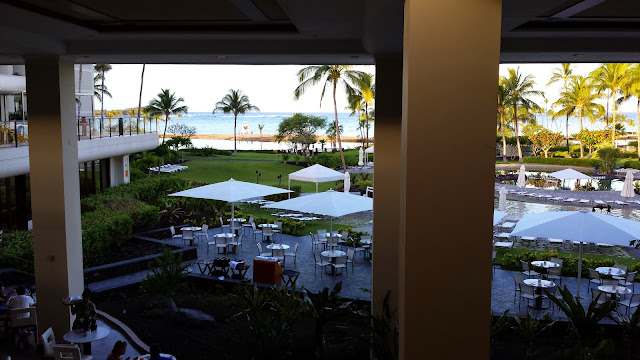 I am old enough to remember Karl Malden and other celebrities on American Express adds starting in 1975, saying "don't leave home without it."  What they failed to say, was don't leave it behind when you return home.  When Amex was one of the first to offer me a pre-approved card in the early 80's.  I jumped at it, with an American Express card I was a grown up.  I still use Amex as my primary card.  And yes, I did leave it behind in Kona, Hawaii in February.

We had flown in late from Maui, arriving a the hotel about 8:00 PM.  We went to dinner at the restaurant on the lower level open to the pool (yes the one in the picture above.)  I paid the bill, and tucked my card not back into my wallet, but back into the folder the bill came in.  I didn't notice it was missing until the next evening when I went to pay checked bad fees at the airport (hint, Hawaiian Airlines gives a discount on checked bag fees if you join their frequent flyer program.)

Within minutes of discovering the card was not in it's happy home, I was on the phone to American Express customer  service.  Once I got past the automated system that kept asking for the card number for the card I didn't have, the service was amazing.  She (think it was a woman) looked me up by name, address and the last four of my Social Security number.  Cancelled the card immediately. Told me that the last charge was dinner the evening before and there had been no attempts to use the card. She offered to express a replacement card in a day or two, but I was flying back to Honolulu spending the night and then from there back to DC on an overnight flight the next day.  I wouldn't be in one place long enough for the replacement to catch up with me before I got home. I always travel with more then one card - and a little cash - so I could get home just fine.  The new card arrived in a couple of days.  After I returned home, I called the hotel and asked if they had found my card.  Sure enough, the restaurant manager had turned it into security.  They asked what I wanted to do, and I said shred it.  In over 30 years, it is the only card I have ever lost - my X - well that is another story.

I know not to leave home without it, now I need to remember to take home with me.
Posted by Travel at 6:00 AM