The Way We Were Wednesday - More Cars 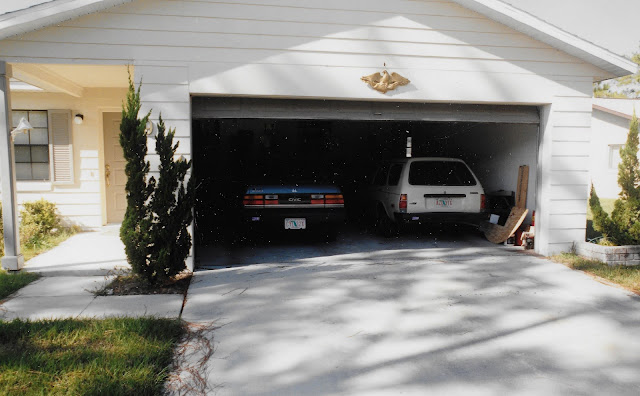 This is the second house I built for myself in Florida, really the third one, I built one that I never lived in, between number 1 and number 2. Long story, that is how my ex ended up as my brother's next door neighbor for a couple of years.  I will try to unpack that one someday.

In the garage are two great little cars.  A mid 1980's charcoal grey Honda Civic LX.  Honda literally sold a million of them, and probably half of them in that color. It was comfortable, easy to drive and reliable.  I bought used, again late one evening, I traded the wife's Corolla on it, a car I had bought used from the Honda dealer 3 or 4 years earlier, and got nearly more for it, than I had paid for it.  For a couple of years we had two white toyota corollas.  The Civic went with the ex, to the house next door to my brother.

Next to it is a mid 1980's Mazda GLC station wagon. I forget what year the Mazda was, if you look up what years Mazda sold the GLC wagon in the United States, this one is a year newer than that.  It was what was known as a grey market or swimmer.  It had been a rental car on an Island in the caribbean.  A Mazda dealer in Orlando had struck a deal to replace a bunch of rental cars, and taken these in trade.  It only had about 10,000 miles on it, and I got a great price on it.  It was spartan but comfortable enough.  Of all of the cars I have owned, it is the one that I regret parting with.  It was so simple and reliable.  It truly was a Great Little Car (GLC.)