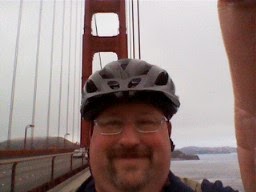 I have rented an electrically assisted bicycle in San Francisco twice.  An electric bike is a wondrous piece of modern engineering, it is normal bike, most are five to seven speed, with an electric assist motor built into the hub (usually in the rear.)  You can turn off the power and ride it like a normal bike, and click on the power for help with going faster, or even more important in San Francisco with help riding up the rather steep hills.

The first time I was in San Francisco, I drove in from Sacramento, coming in from the north across the Golden Gate Bridge.  It is a spectacular bridge. I was back a few times, seeing the bridge from a distance, and from the water, but not getting near it.  Driving a car in San Francisco once was enough, traffic is bad, and parking is terrible, as I recall I paid $35 to park for 9 hours.  I have stayed in less expensive hotel rooms.Getting near the bridge from the areas of town you are staying in, is a bit of a long walk.  So I rented a bike one trip.

The bike ride is wonderful, I rented from a shop down near Fisherman's Wharf. from there you go a few blocks west, along the bay, around past the swim club on the bay, climb through a park, past a big marina, and climb and climb and climb (the electric bike really helps with this, the last hill you have to peddle to climb even with the electric assist) and you end up on the southern end of the Bridge.  There are pedestrian walk ways on both sides of the bridge, but generally they only open one side at a time - they provide a lot of monitoring and public safety (ie: trying to stop jumpers) and to control costs they only open one side most days. Both times I was there the east side of the bridge was open with spectacular views of the city. The first time I rode out on the bridge a little past half way, and chickened out.  I was getting tired, and I was afraid that if the batteries went flat I would have a hard time getting back to the shop (little to worry about, almost all of it is downhill going back to the city.)  Afterwards I regretted not pushing on.  So the next time I was going I set a goal of riding all the way across.  I rented a bike again and the second time I rode all the way across to the scenic overlook on the Marin side.  It was wonderful.  I have a couple of video clips taken while riding back across the bridge toward the city. The next time you are there, give it a try.