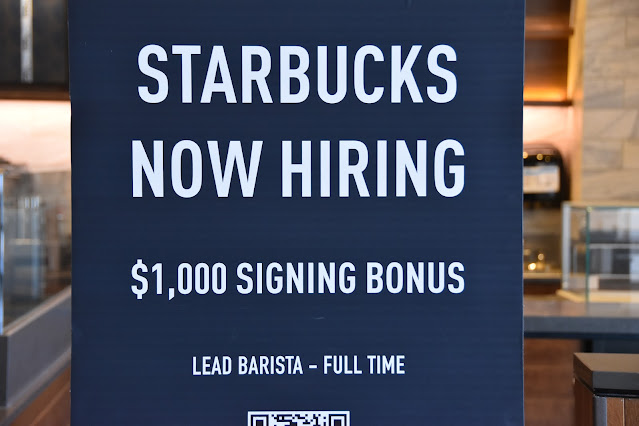 A couple of weeks ago it was cold and I needed to get out of the house. I wanted / needed to take a nice walk.  I drove across The River, to the MGM Casino in Maryland, it has a lot of walkable indoor space and is smoke free as all casinos should be. This sign was in front of a closed Starbucks.  The casino was surprisingly busy, it was a cold day, people looking for something to do indoors, had stopped in for a walk and to spend a little money on the video games, or a lot of money thinking they can outsmart the table games.  (I left $6 behind, about what I would have paid to park someplace else to park so I could walk indoors, the casino has free parking in a land of $5 an hour parking garages.)

It was a day when Starbucks, or any coffee shop, should have been open, should have been doing a brisk business. Starbucks has a decent reputation as an employer.  Few people are going to earn a generous living working there, but they have a reputation of paying higher wages and making better benefits available - health insurance - college tuition reimbursement than other "fast food" outlets.

My rambling thoughts, there are several factors at work.

A lot of employers consider people, human resources, to be the flexible, fungible part of their business, and when things shut down, they simply cut hours to zero. Many of the staff found other things to do, or realized they hated what they were doing.  It is hard to get them back on the farm, after they have discovered life.

When I studied business management, back when dinosaurs roamed the earth, the goal of a business was for an employee to generate enough revenue to cover the cost of employing the person, plus a 10-20% margin for the employer (the margin in my office is lower than that.) Today the system seems to be to pay as little as possible on the supply side, while charging as much as possible on the demand side, to create the greatest possible margin in the middle.  Few businesses show the real numbers, but the margins are phenomenal, we have a lot of companies paying $10 an hour for front line staff, while the owners and executives earn millions.  Business has gotten greedy, and the events of the last couple of years have created an environment where employees can object by walking away - and they are.

A lot of food service jobs have been staffed, either on the front lines, or in the back rooms by recent immigrants.  If you read Anthony Bourdain's Kitchen Confidential and you know this is nothing new, the best French chefs in New York, are Mexican and Central Americans.  The past few years have not been friendly in this country for immigrants, legal or otherwise.  We cut off temporary work visas, then brought them back but the process time is interminable, and the underground economy of people without paperwork, has ground to a halt.

Sadly our immigration system has been a mess for so long, parts of our economy had become dependent on illegally employing people who lacked paperwork, or how shall I say this, had paperwork that was not entirely legal.

This is an old problem, several years ago I was reviewing my Social Security Earning and Benefits statement, and it showed more in wages one year than I knew I had earned, like $20,000 more. I called an insider who looked at the record and simply said, someone used that Social Security number to report earnings, paid the tax on it, probably someone without a legal number. The name didn't match, but the number did and that is what we use. It happens all the time.

The system is still a mess. A guy I know, who is a US citizen, whose two children are US citizens, born here, is 5,000 miles away from his wife and kids.  His wife is waiting approval of a visa, she is not a US citizen.  They were married and living here when the kids were born, but because she went home to visit family and her visa expired, she has been waiting almost two years for permission to rejoin her family. This is not a green card marriage, the system is broken if it is keeping families like his apart. (He spends about 4 months a year with his wife and kids in Africa, and telecommutes to his job in DC.) He is incredibly talented, we need him, if this drags on, he can get permanent residence where his wife and kids are in one day, one visit, they want and need people with his skills (and so do we.)

If we want to solve the labor shortage, we need to fix our immigration system.  I have my grandmother's naturalization certificate, I think I am going to frame it and hang it in my office as a reminder that we are all immigrants.