The Way We Were Wednesday - Oh Deer 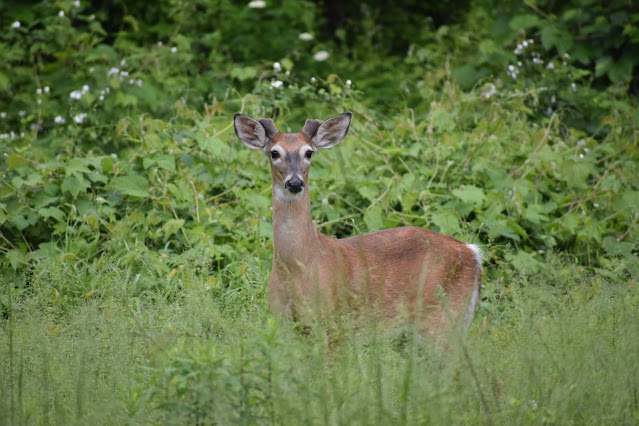 The area I grew up in Michigan, was pretty well hunted out of deer from the 1950's into the later 1980's.  The area was overhunted, the local farmers thought the deer destroyed crops, and there were diseases transmittable between deer a cows that the farmers wanted to avoid.  Hence there was probably some out of season population control.  I never saw deer on the 80 acres that was home, rarely saw them in the surrounding area.

On rare occasions we visited northern Michigan, very rural area north of Saginaw Bay,  and there were always deer to be seen.  Sometimes only a few, sometimes large herds.  The area had more woodlands, and fewer farmers, and was far enough away from the population centers to have a much more dense deer population.

Hunting declined in the late 80's early 90's and when I visited the farm I would often see one or two deer.  In some areas the population exploded to the point of being a nuisance.

Where I live here in the DC suburbs, we are on a 35 acre hilltop with 4 high rise towers surrounded by heavily wooded ravines.  We have deer inside our fence most summers.