The Way We Were Wednesday - Dad's Drivers License 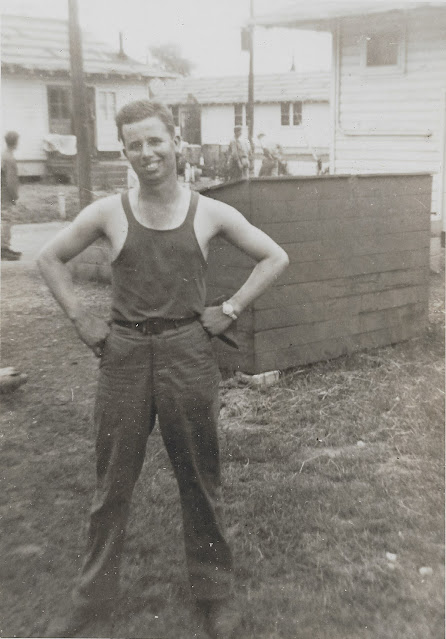 My Sunday Five on Learning to drive a couple of weeks ago, reminded me of the story of my father getting a driving license.  He was barely 15 years old.
Bob, one if his close childhood friends was a couple of years older, and had owned a car, or two or three.  Bob was not rich, far from it, he was a talented mechanic and would take junkers that everyone else was ready to send to the breakers yard and make them run, and drive the wheels off of them, then sell them for a profit.
Dad was been pulled over by the local police, driving Bob's car, probably a little fast through town.  My grandmother was summoned to the local police department, dragging my father along.  The chief of police boomed at my grandmother, "if you are going to let him drive he needs a license and he needs to slow down."  She meekly said yes, "George SLOW DOWN, or you know what I will do!"  The chief asked my grandmother "does he know how to drive?" then started to laugh saying "I know he knows how to, he nearly outran my officers."  He said to my grandmother "if you will vouch for him, and promise to watch his speed, I'll sign off on it."  And that is how my father got a driving license.
He drove well into his 80's.  He only had a couple of tickets.  Until the last few years of his driving only one accident.  In his early 80's he hit a farm wagon one summer in Michigan, and hit the curb hard enough to break the suspension twice.  He quietly stopped driving a couple of years before he died.  His choice, as it should be.  He never did slow down, I don't know how he avoided speeding tickets for seven-decades.
The photo is my father at 18 or 19 years old, he drafted into the army near the end of World War II, and defended New Jersey, the Germans never took the state.
Posted by Travel at 12:00 AM