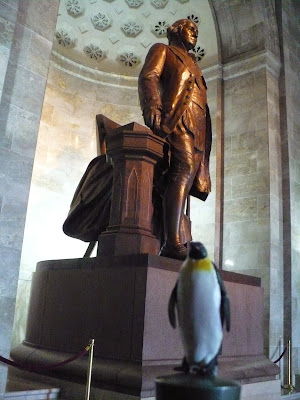 I don't buy into the conspiracy theories that the Masons are part of a secret plot to rule the world, no more the KofC, or Rastafarian's.  George Washington was a mason, as many men of his era were, it was the social club for networking for fine young Englishmen of his day.

The George Washington Masonic Memorial is in Alexandria, Virginia.  It  is easy to get to located just up the hill from the King Street Metro station and the Amtrak station.  There is also parking adjacent to the building.  The grand hall on the ground floor is free and open to the public and among other things contains this grand statue.  The building has a tall pyramidal shaped top.  For a modest fee they offer a guided tour of the museum and up through the tower.  Each level represents a different aspect of Mason sects.  At the top there is a fin outside walk around observation platform.

A significant part of the collection centers around George Washington.  The clock that the doctor stopped, when Washington died is in the museum.
Posted by Travel at 6:00 AM