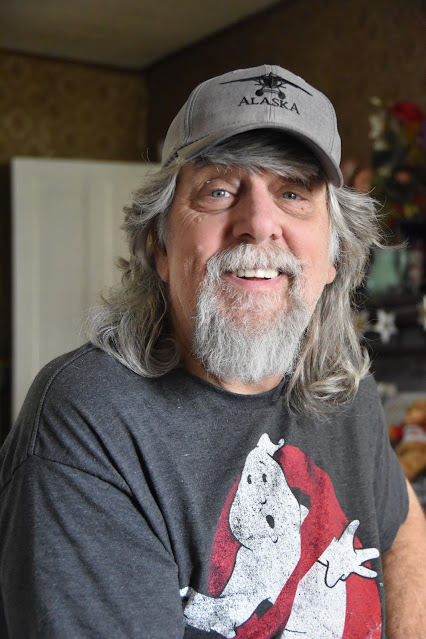 My brother in law Peter died Wednesday morning.  He was 65.
My sister dated Pete, or maybe it was his twin brother Paul, when she was in high school.  Then they went their separate ways.  She finished school and went to work, he went off to college and graduate school.  Both of them married someone else.  He did that several times. Both had families. Both divorced.

Pete's father Bill was the high school biology teacher in our small town.  His father and another teacher bought the back half of the farm from my grandmother, split it into ten-acre strips and resold it.  When Bill died, my sister went to the funeral, made contact with Pete, and one thing led to another and they moved in together, then onto Florida to care for my parents, and married in the front yard of my parents home in Florida.  Near the end of their time in Florida Pete started passing blood in his urine, he was treated for bladder cancer.  After Dad died, they moved back to Michigan.

He was treated on and off for urinary tract cancer over the past 6 years.  A couple times he declared victory, only to have cancer return.  This last time the reoccurrence was massive, the cancer had spread to vital organs, and into his spine.  As he described it the doctors told him "he was screwed" there was no treatment that would kill the cancer without killing the host.

Pete was an interesting man. He had a Phd in psychology, he spent most of his working years running addiction treatment programs in prisons, much of it in Alaska. I heard him counseling a couple of times, he was good.

He loved the outdoors, hunting and fishing.  He intended to return to Alaska, but his health made that difficult or unwise.  He and my sister put off a trip to Paris, a trip that will never take place. Never put off that trip.

I went to see them in early July.  I took the photo above on that trip.  I knew when I left that time, it was the last time I would likely see him alive.

He lived life on his terms.  He was bright, and bullheaded.  If he wanted to help you, there was no end to what he would do, if he didn't like you - you knew it.  He was intensely private, and loud. My sister loved him, and he loved her.  He helped her pick up the pieces after her divorce.

He will be missed.  I am diverting my road trip, to be there for her.

The post that was planned for today, will appear in the future.  Pete's health had been getting worse and worse, I had this drafted, waiting for a final edit.