The Way We Were Wednesday - the Blue Dodge 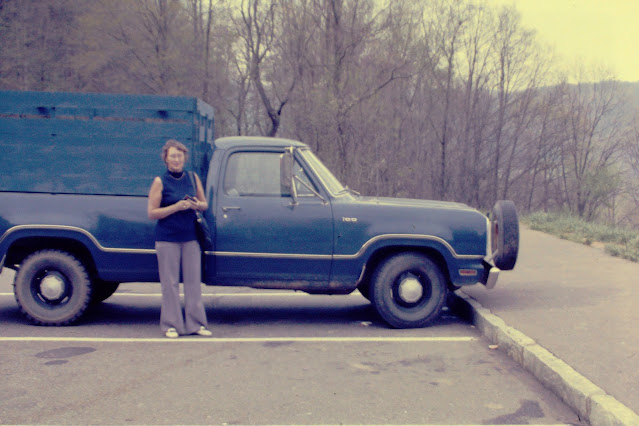 There weren't a lot of them, because they were utilitarian, used until they were no longer useable, but there were always pick-up trucks around when I was growing up. There was an early 1950's Ford, traded in 1965 on a red Ford, the early one I have no real memory of.  A yellow Chevy, bought used from a utility company. And the Blue Dodge.  It was the last one.  My father bought around the time my grandfather retired, my grandfather kept the red Ford, it was around for me to learn to drive in.

The Blue Dodge was fun.  It had a massive V-8, it might have been a 440. My father bought it used, no one wanted it because it had a massive engine and got lousy gas mileage. He only drove it a few thousand miles a year and didn't care about the miles per gallon.  It was a handful on the gravel and unpaved roads, if you put your foot down you needed to be prepared to correct for the slide.  About a mile and a half north of the farm, I would turn right onto a paved road, put my foot to the floor and and rocket from a standstill to 60 miles per hour before the rear wheels quit spinning.  For decades I kept that my guilty little secret.  Late in my father's life someone mentioned the blue Dodge and I said how fun it was to drive. In his best deadpan, my father looked at me and said "I know, I could hear you on a clear afternoon, from a mile and half away - it was fun wasn't it?"