The Way We Were Wednesday - The Tractor 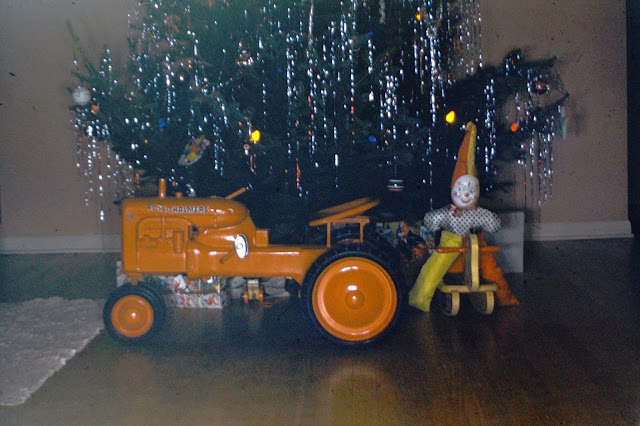 When my oldest brother had his appendix removed, his hospital room mate was the son of a local farm machinery dealer.  He came home from the hospital with an amazing toy tractor.  A couple of years later my middle brother had his tonsils removed in the same hospital.  He was angry and upset when he came home from the hospital. But he didn't communicate why he was upset. He has some challenges in his life, and communicating is not always easy for him. A lot of his moods were dismissed as him being a little different without anyone taking time to help him communicate what he was upset about.

Decades later, he finally told my parents that the reason he was moody, upset, angry, was that he had surgery in the same hospital and didn't get the same toy that his older brother did. For decades he thought it was because he was not worthy.

A few years ago, he told me how poorly he was treated in the schools, because he was a little different.  He honestly felt that half of his time in school was wasted, repeating the basics, the fact that he was able to understand that his time was wasted, tells me he was a lot more capable than anyone recognized, they never took the time to listen to him, they were to busy telling him.  All he wants is to be treated the same as everyone, to feel worthy.

The photo above is from the family archive, likely a special Christmas toy for the first grandson, one that was handed down, and never duplicated in grandeur.  I remember skinning my ankles on the nails used to replace the pins that held what was left of the petals by the time I was the one playing with it.