The Way We Were Wednesday - GB Dupont 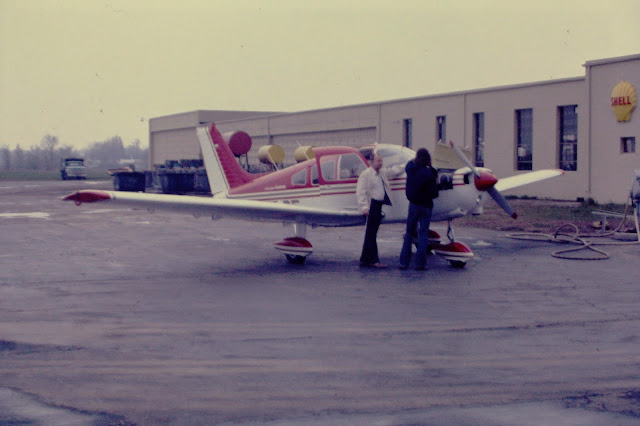 If you drove or rode in an american made care in the 1960's or 70's, odds are some the bolts or screws that held it together, well to the extent American made cars of that era didn't just rattle apart going down the road, were made by the G.B. Dupont Company.  They had to manufacturing plants, one in Detroit suburb of Troy, one in a tiny farm town north of there called Lapeer.  The building the background was the Dupont plant in Lapeer.  Why there?  G.B. as he prefered to be called, loved to fly.  When he was looking for a second location, he spotted a small country airport and a couple hundred acres of land for sale.  I bought it, built an industrial building, improve the airport paving the main runway, took on dealerships for Piper, Beech, Money, and eventually Cessna. My father learned to fly closer to the city, but Lapeer was his home airport for 20 years.  Through the 60's into the early 70's they would keep a couple of new "demonstrators" that were available for rent.  When they sold one, they would put another one on the line for rent.  It was nice flying new, or almost new airplanes in an era when most rental fleets were filled with flown out - worn out planes.

G.B. got lost between cloud layers in the middle 1970's and narrowly found his way to an airport.  After that the company provided him with a pilot whenever he wanted to go anyplace.  The screw and bolt company was sold to a mega conglomerate in the mid 70's, the airport was operated by G.B.'s son Kent for another decade or so, then sold.