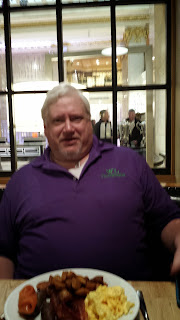 JP has been gone a little over year year.  At times I am haunted by memories.  Did we, bloggers, society, the medical system fail him?

Anyone who read his blog, knew that he was troubled, deeply troubled by something. He posted about drinking himself to sleep, being depressed, and worrying.  If you spent a couple of hours on a bar stool next to him and got him to talk about his life,you knew he was struggling with something.

When I talked with him I remember being very uncomfortable at things he said and wondering if I really understood what he was saying - I didn't.  Point blank, I missed the clues, he was deeply troubled, and I was clueless about understanding what he was saying or to how to urge, or push him to get help.

I have edited this posting deeply to try not to offend his friends. There are clues to what was troubling him, but my goal is not to accuse someone who can no longer explain what he may or may not have done.  He was troubled, and the help he received didn't help, it didn't work.  As a society we need to do a better job and helping people, get help to deal with the issues in their lives.  We need to see the clues and urge others to work through what is bothering them.
Posted by Travel at 12:00 AM