The Way They Were Wednesday - Horses 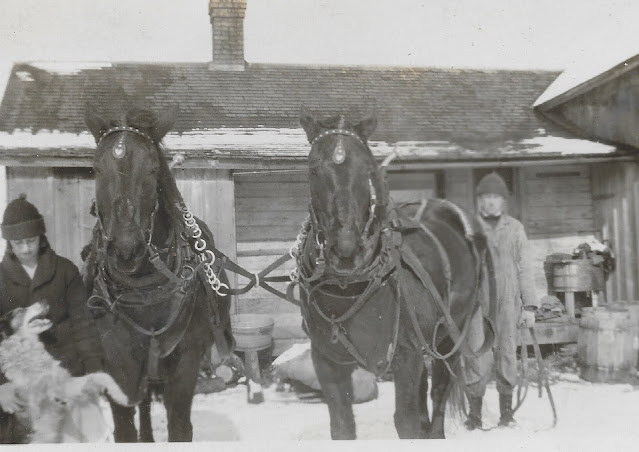 Both my grandfathers grew up farming with horses or mules.  My mother's father resisted changing over to mechanized farming, and did so reluctantly around World War II.  My father's father told of being sent off summers as a child, to work for a farmer cultivating fields with a team of horses or mules on bottomland along the Mississippi river near St Louis, for a few cents a day, because the family needed the money to keep from going hungry in the winter.  His family moved to Detroit when Ford was advertising $5 a day, he always loved the land and farming, but never wanted to keep animals (other than bees.) If not for his mother, there never would have been farm animals on the farm he owned.  (She kept chickens and a milk cow.)

The Photo above, is my mother's father with two horses in full harness.  I am not sure who the woman on the right is, could be my mother.

My mother's mother lived with dementia for nearly a decade. She would get lost driving her car.  My mother was helping her sort the mail one day, and the car insurance bill was in the stack. My grandmother remarked, "oh I can't afford that, I should get rid of that car." My mother seized the opportunity to buy the car from her mother for what she had paid for it a few years earlier, drove her down to the Courthouse, transferred ownership as fast as she could.  My mother left her car parked near my grandmother's house, and drove the car she had bought from her mother home that afternoon.  (She gave the car to my brother who needed a car.)  As my grandmother's dementia progressed, she would refer to my mother as "that woman who took my horses away!"