The Way We Were Wednesday - Something French for a Change 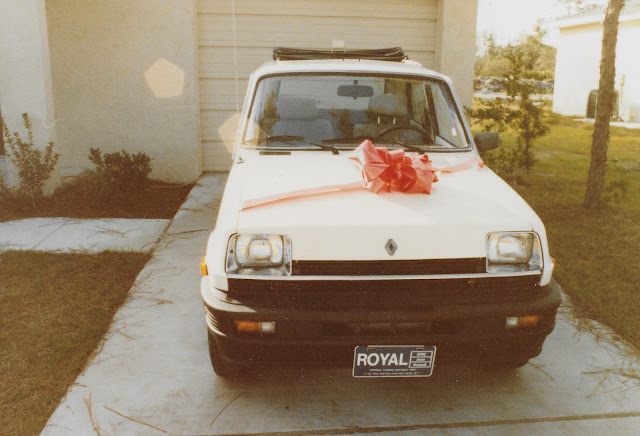 Based on advice from the service manager, the bunny needed to go.  I looked around a little, I wanted something new, something with a warranty.  I was working for a small family owned development company that treated me like family, stingy family.  The money was always there, but not a lot of it.  On the way to the weekly staff meeting I stopped by an American Motors Jeep Dealership.  Renault had bought an interest in American Motors, trying to figure out how to rescue American Motors, and trying to get a solid foot in the US market.  That idea was abandoned after a few years, and Nissan partnered with Renault, I think the interest was finally bought out in one of the Chrysler reorganizations.
Part of the early strategy was to import French built Renault's into the US.  This was parked out front.  I took it for a short test drive, it was comfortable, fast, had a canvas folding sunroof, a killer AM-FM stereo system, and the coldest air conditioning I have ever had in a car (ice would form on the vents on the dash.) They made me an offer on the Rabbit, I said yes, the deal was done and I was out of there driving this to the office in about 30 minutes start to finish. (Maybe the fastest I have ever bought a car.)

It was amazingly fun to drive.  I drove it to New Orleans to the World's Fair. About 18 months later, after the warranty has expired, the brake failure warning light came on.  I had the brakes replaced, and it started leaking brake fluid.  Two different shops worked on the brakes, and no one could find the problem, I was adding brake fluid every couple of days.  The mechanics hated the car, the service manager at the dealer I had bought it from begged me to not bring it back again.

It had some quirks, Renault had stuffed a larger engine in it for the US market, you couldn't change the rear spark plug without removing the engine, or cutting a hole through the back of the glove box.  Most of the markings were in French, it blew a fuse, and was using a French/English dictionary to decipher what I needed to do to fix it.

Still I was young, it was a fun car.  I really enjoyed it.  When I traded it I made a car salesman cry.  I will explain that someday. Not the last time.

Oh the bow, I bought a couple of days before Christmas.