Travel Tuesday - How To Do This 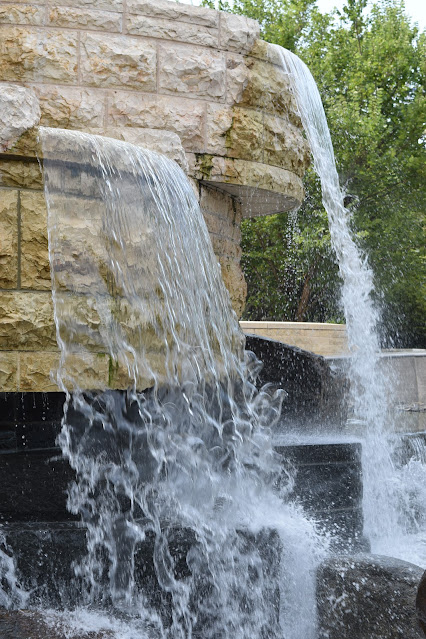 Here are two photos of the natural fountain on the northwest corner of the Smithsonian National Museum of the American Indian.  The top one is in standard auto mode on a digital camera.  This is the image you would get with a camera phone.  The action is frozen, depth of focus is relatively shallow.  In the second image the water is moving, it is cascading, there is a wider range from near to far that is in focus. Not everyone, and not always, but many people would find the second image more interesting, dare I say more beautiful.  It is essentially the same scene, the difference is in shutter speed.

So, how to do that. If your camera has an aperture priority mode, click on that, and stop the lens down, in other words turn the dial until the largest possible number appears, that will force the camera into the slowest shutter speed.  Alternatively if your camera has a shutter priority mode, you can dial down to the slowest possible shutter speed. Many digital cameras will resist letting you go to a shutter speed below what freezes the action.  Alternatively you can go fully manual, select a low ISO speed, I would go down to 50 if I could, then set aperture to mid range, and you should get a shutter speed of 1/4 of a second or slower.

The second image above was ISO 100, f32, 1/6th of a second, handheld with a lens with VR vibration reduction.  An amazing image for handheld at that shutter speed, I used aperture priority mode, on a Nikon D5500, and an 18-55mm DX VR-II lens.

This is an interesting museum.  The building is very impressive, the collection and displays have improved over the years, but it still struggles with trying to paint a coherent picture of vastly diverse histories and cultures. It tries to make everyone happy.