The Way We Were Wednesday - What An Appropriate Shade of Yellow 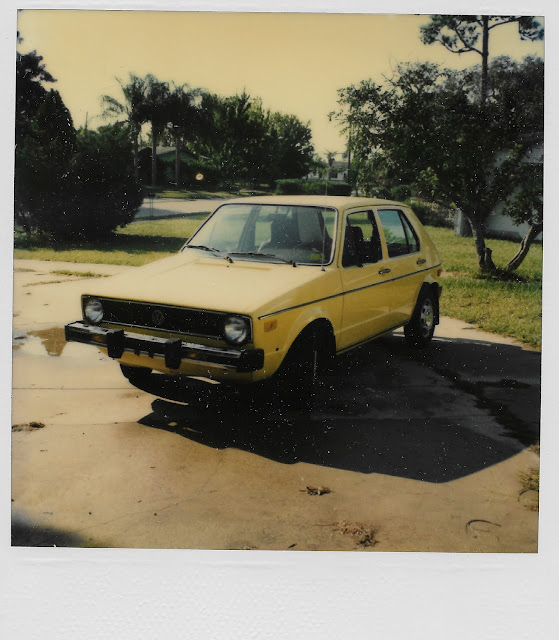 A year or so after buying the ugly Oldsmobile, I moved to Orlando and went to work for a land developer / home builder.  My work was in field offices spread across two counties, often 25-30 miles from home to work.  I was also driving to my parents house on the east coast at least once, and often twice a week.  And the price of gas was spiking.

I was rolling up Interstate 4 one morning when a VW Rabbit Diesel passed me, and it struck me I was trying to stay under 55 miles an hour, hoping to get 20 miles to the gallon, and the cute little VW was going by doing probably 80 and getting 40 miles to the gallon.  A few days later I pulled into a VW dealer on the way home.  I should have bought the one I looked at that evening.  But I wanted to be sure, so I stopped at another dealer a couple of days later to compare prices on used cars.  And I found this.

I don't remember the year, late 1970's or very early 1980's VW Rabbit Diesel, the L trim package.  I don't remember how many miles it had on it, not a lot, it was a couple of years old.  VW listed the color as Lemon Yellow.  I should have seen that as a sign.  It overheated on the way home the day I bought it, and went back to the dealer, who rebuilt the heads (warranty on an a used car without a warranty, the dealer was good.)

I drove the crap out of it. It was a little slow to accelerate, but once it got going it would go 80 miles an hour all day, if I kept it close to the speed limit it got about 50 miles to the gallon.  I loved that if someone was tailgating me, I could floor it and leave them in a cloud of sooty diesel smoke. I raced a Rolls Royce one night on I-4 (he won but I gave him a good run.) In a little over a year, I put about 40,000 miles on it, then one morning it wouldn't start.  I had it towed to the dealer, who pulled and reworked the heads again, and basically said, it has been fried to many times, it is only going to get worse.  I traded it shortly after that.