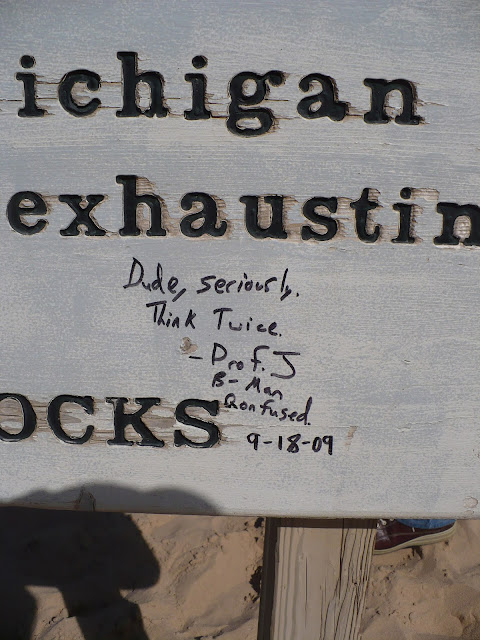 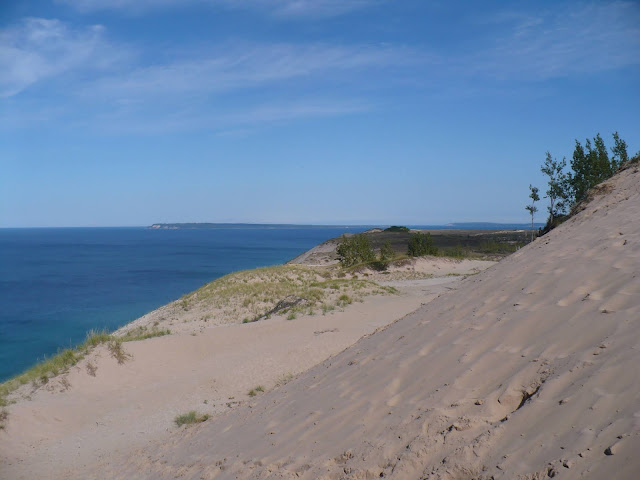 I was born and mostly grew up in Michigan (with time in Arizona and Florida along the way,) but saw surprisingly little of Michigan.  I have never been in the Upper Peninsula.  It was decades after I moved away from the "Winter Water Wonderland" before I saw the west coast of Michigan, the Michigan coastline on Lake Michigan.  After I moved to DC I was invited to speak at a conference near Traverse City.  Far enough away from civilization to justify my office paying for a rental car.  I took advantage of the car to do a little sightseeing.  My first, and so far only time, visiting Sleeping Bear Dunes.  These are massive, 200-500 foot tall sand dunes along the shore of Lake Michigan.  I had heard of them, but not seen them. The sign at the top, with the hand written warning, was a sign warning about the ease of sliding down the sand dune to the waters edge, and the exhausting challenge of climbing back up the dune. Heart-attack hill if there ever was one.

Amazing this was in the same state I grew up in, and I never saw it.  I had been across the country, and a quarter of the way around the world, but not across the 200 miles of state to see what was there.  Reminds me to look at the wonders in my own backyard along the way.