The Way We Were Wednesday - The First Spouse 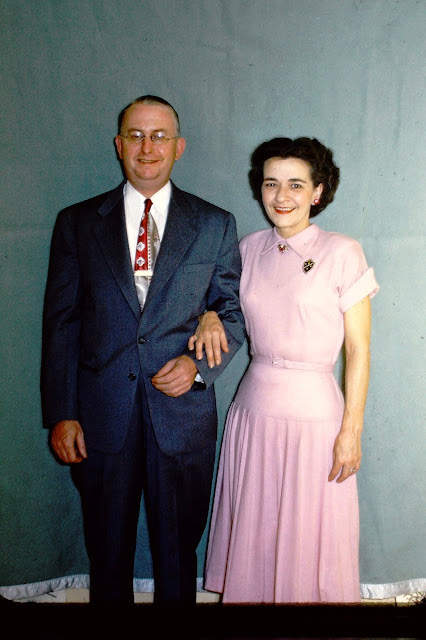 This was taken in the early 1950's, before my time, cousin Nellie and her first husband - I think his name was Al.  All I know is the marriage was short, the divorce ugly, in an era when you had to prove adultery, cruelty, or abandonment to the Court.  There were mentions of poverty, abuse and unhappiness.  After the divorce she moved to Miami with an Uncle, Uncle Bob, who sold his bar in New York when he sobered up, and moved south to start over.  Nellie married a prince of man, Winifred, who had move to Miami from New Jersey.  He was a heavy equipment mechanic, and master of all trades.  Nellie never had kids, Win had one son, a drummer in nightclubs in Miami Beach, and a granddaughter.  The son was a bit of a sponge, always trying to get more money out of his father, they adored the grand daughter and did the best they could to give her a good start in life.

When they retired, they took a long delayed cruise, Winn had a heart attack in the middle of the Panama Canal, survived and lived another 10-15 years.  They sold out in Miami and moved to Sebring Florida.  Nellie had lived with my father's family during World War II (their house was a virtual refugee center for a few years.)

I never knew the first spouse, but love was good to Nellie the second time around.