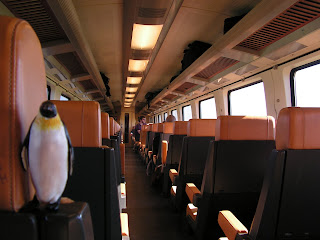 So much of my travels are hurry up and wait that once in a while it is nice to just take my time. To indulge in this I took the slow train from Brussels to Amsterdam. The ride took about 4 hours and stopped in about 15 places. The train was full of young backpackers going to places like the Rotterdam, Antwerp and Amsterdam for what ever reason it is that young people go to these places. The Dutch allow smoking on the platform between the cars. The moment we crossed the boarder from Belgium to the Netherlands the young people started going onto the platform to smoke tobacco. At least it smelled like they were smoking tobacco. We were not across the square in front of the train station in Amsterdam when someone within sniffing distance lit up something that DG had not smelled in 25 years, oh yeah, on the side walk, in clear view at midday on a Sunday. The rules are different there (though I think this is still illegal.) Ah, yes, a nice relaxing slow moving visit (even if we were doing the forced march through western Europe.)