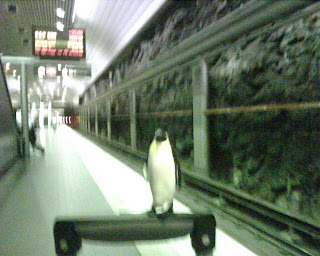 There is a raging debate going on in Atlanta over a proposed local ordinance that would make it a crime (punishable by a fine of up to $500 and up to 6 months in jail) to wear pants hanging so low that the wearers' “private parts or but cleavage” would be exposed. As one commentator pointed out, thank god most of them wear underwear. Another person pointed out that she had seen too many pairs of boxers and one thong (on a man) was more then enough THANK YOU! Now it is important to point out that the style trend of very, very low rise jeans does not appear to have reached Atlanta as yet (when the world comes to an end you want to be living in the south, it takes a couple of years longer for things to catch on there.) The controversy is about young men wearing oversized pants that hang low (in many cases falling off) exposing generous amounts of underwear. I know this style is passé in modern parts of the world, but still very common in Atlanta.

One burning question, if this ordinance becomes law, what about penguins? Will I be free from arrest in the subway stations when I return to Atlanta?

Squirrel is right, it is humid a squirrel shit in Atlanta.
Posted by Travel at 7:49 PM