Revisiting the past, to see the present 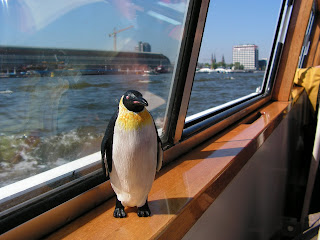 There are certain second trips that have to be made. No logical explanation, someone just has to go. A second visit to an exotic location is generally going back to a revisit a place that someone really enjoyed visiting the first time. But, what about going back to visit someplace that was ok but held no special memories? DG used the explanation for returning to Amsterdam that he needed find out if it was the city or the company on his first visit that left him feeling ambivalent about the city. He felt compelled to return. WH coined the phrase, psychically redeeming the city. And so we were off for a quick overnight stay in Amsterdam.

In the vein of trying to decipher if was the city or the traveling companion that was a pit in 1991, there were a couple of things we had to do. We stayed in the same hotel, under new ownership, but as wonderful as ever right on the square across from the main train station. The hotel was not the issue with Amsterdam; it was and is very nice, very comfortable and very accommodating. Next, we had to take a boat tour of the canals. DG even bought a picture of us boarding the boat, to go next to the one taken 16 years ago (he has aged and picked up a couple of pounds; but his hair is about the same.) The boat tour was nice, probably nicer in the winter, the greenhouse windows made it a bit warm for we Antarctic types.

These things being accomplished we looked for differences. The first trip DG flew in landing in the fog with near zero visibility and out with a quick taxi ride to and from the airport. This time we arrived by slow train. Between Brussels and Amsterdam the train made about 15 stops in about four hours. We slowly cruised through Dutch countryside passing idyllic villages, modern and traditional windmills. On the first trip DG failed to see a windmill, because you have to leave town to see one. Fear and insecurity kept DG and his traveling partner 16 years ago from straying from the very well beaten tourist path. Then we explored the city. Now Amsterdam has a colorful side, some would say seedy side. For many this is part of Amsterdam’s appeal, for others it is the source of great concern. The first time DG visited there was great concern about turning down many of the narrow shadowy side streets. This time the attitude was different. Not careless, or reckless, but willing to stop, look, listen and proceed. Other then being solicited by a couple of working girls (boy were they barking up the wrong tree) things went very well. The journey to rediscover Amsterdam was also a journey of self discovery for DG.

Bottom line, Amsterdam is still a strange town. Not on the list of places we want to return to over and over again (we do need to go back and see a museum or two that we lacked time for on this trip.) At the same time Amsterdam is an interesting city that will help you see and understand yourself just a little better.