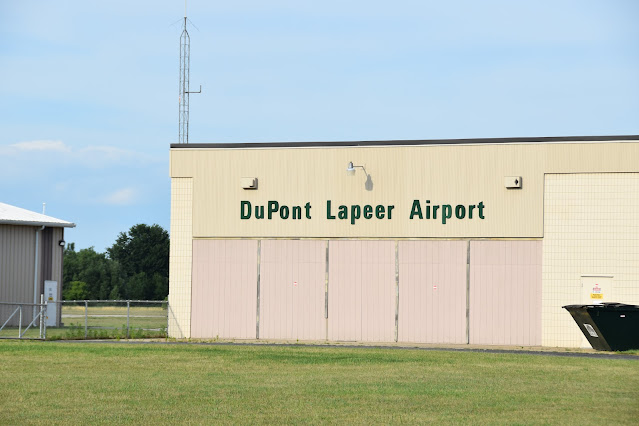 My father took his first flying lesson February 6, 1955 at Almont Michigan in a Ercoupe.  The Ercoupe was a simple design, without rudder pedals, and very easy to fly.  After a few hours, he moved onto a Piper J-3 Cub.  This the classic little yellow taildragger airplane with the passenger sitting in front and the pilot in back. It has rudder pedals and a very sensitive rudder. He would tell the story of his first takeoff in it, with the tail swinging wildly from side the side and the instructor  roaring with laughing, until he got up to speed, the tail lifted off the runway and the plane stabilized.  Once you had it, it was easy, it took a couple of passes to get the feel of it. He had a couple hundred hours in J-3s before moving onto Cherokees and Cessnas.

He bought a J-3 once, it was a basket case, coming home in pieces.  He had it stored in the honey processing plant, his father came home from Florida and demanded it be moved - lacking a place to work on it, he sold it.  The next plane he owned, the last plane he owned, was primarily restored at a friends house, the fuselage was recovered in Bob's dining room. The wings in a garage my father had built on the farm by then, one of my earliest memories is the wings in the garage.

By the time of my memory, dad's home airport was DuPont Lapeer.  George B. DuPont (GB as he was known) loved to fly, and made his fortune making bolts and screws for the auto industry.  He was on in years, I met him a few times, his son Kent was in charge of the airport and the manufacturing company by the mid 1960's.  They had bought a half section of land in Lapeer for a header* and thread rolling plant, and naturally built an airport along with the plant. The manufacturing operation was sold many years ago and is still there.

The "new terminal" was built in the 1970's.  On weekends it was abuzz with activities. I spent many a Saturday morning or Sunday afternoon there.  I actually liked the old terminal better it had mid-century vibe and a great reception room.  The old terminal was converted into offices for the screw company when the new terminal opened.

Back in my day there were usually half a dozen small planes on the ramp, often a helicopter owned by a local contractor who had been a pilot in Vietnam.  When I went by recently, there were a few cars in the parking lot, and no airplanes outside. The signs for dealerships for Piper, Cessna, Mooney, and Beachcraft are but a distant memory.  Fuel service is self service - credit cards only.

It is heartbreaking to see the decline in general aviation.  Back in the 70's you could buy a new four seat airplane for about 3 times the price of a new Buick, today the same plane is 10 or 15 times the price of new car.  Where my father bought a learn to fly package that guaranteed a solo for $99, today according to Google this would cost $7,000 to $9,000. He financed learning to fly by giving up smoking.

* Header, screws and bolts are made by feeding a heavy wire into a machine that cuts the stock to length, and then hammers a head on it, flattening the end of the wire stock on to die. Then the treads are rolled onto the blank. This is done by automated machines that cut, and hammer the head on, hundreds of times a minute. They had an acre of those machines, hammering away 24 hours a day.  The noise is likely what lead them to move out into the country.  When I was a kid they bought out several neighbors to help alleviate noise complaints.