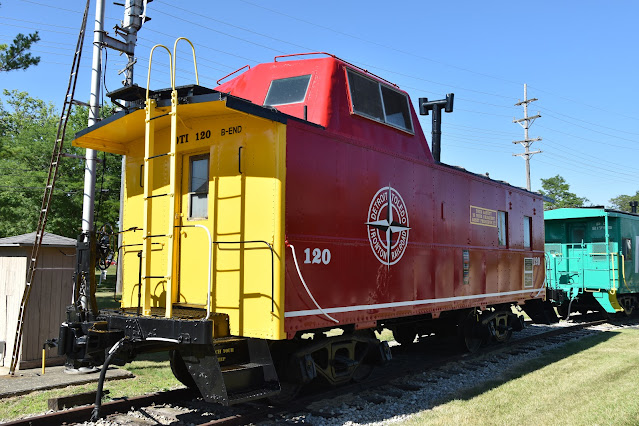 I have no idea why I like trains, I do. I find them fun.  Outside the train station in Lapeer Michigan are three nicely preserved cabosses.  The Detroit, Toledo and Ironton railroad would have been built to move iron ore from northern Michigan to steel mills in Detroit and Toledo that fed heavy manufacturing in the midwest.  I never knew of this one.

Some people find cabosses romantic, my reaction was that they were very utilitarian.  Originally they were home for the brakeman, who literally climbed up on the outside of the train and engaged the brakes on train cars.  The interiors were spartan at best, often having a wood or coal stove for heat and cooking, and very basic accommodations for train crew.

As a kid, the best part of seeing the Caboose was that the train had passed and we could cross the tracks (after stopping, looking both ways, and listening to make sure another train was not approaching.) Cabooses continued long after pneumatic brakes, a place for an observer at the far end of the train, and union rules required them, even when they were no longer needed.  Today they are museum pieces.  And fun to see.