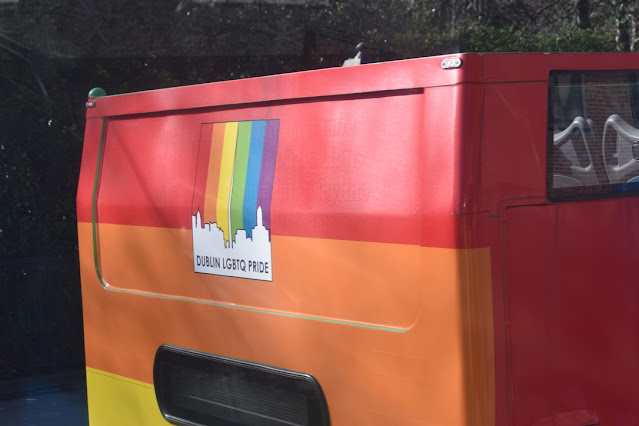 I participated in my first couple of Pride Parades in Orlando in the early 1990s, as part of the Orlando Front Runners, (it is good to see the group is still active.)  It was a fun group.  On Saturdays we ran, then went out to breakfast, a breakfast club with a running problem.  One year the parade was being heckled by robed KKK members. One of the runners snatched the hood off of a klansman.  I helped bail him out of jail.  The charges were dropped when the POS declined to come to court as a witness.  Not so brave with his hood off.
The running group was reaffirming.  A place where I could be me, and not worry about being the strange one in the group.  People who are out of the mainstream, need that safe place to let their guard down.  It was a place I didn't need to try to fit in.  I fit in.
The parades were a public affirmation, of identity, and of unity with others, showing ourselves and not being intimidated by the haters. They were an act of bravery in a sometimes hostile world.
Being out has not always been easy, I lost a good job, a job I really needed after being outed by a coworker to a nut case of a boss.  I have been the target of a homophobic rants by men who thought I looked at them too long.  I have had the occasional epitaph hurled at me.  I have walked out of business that didn't want my business.
I didn't come out until my early 30's.  I have lived life deep in the closet, deep in self hatred.   I was an unpleasant person.  Maybe it is doubling my age, maybe it is being comfortable in my own skin, but I am happier and I think more pleasant to be around as an out gay man.
Every person needs a place that they feel comfortable, being around people like themself.  Every person needs to be comfortable in their own skin.  We have to love ourselves, before we can truly love someone else.
Debra over at She Who Seeks, is doing a virtual pride parade this year. Will you join her?
Posted by Travel at 12:00 AM