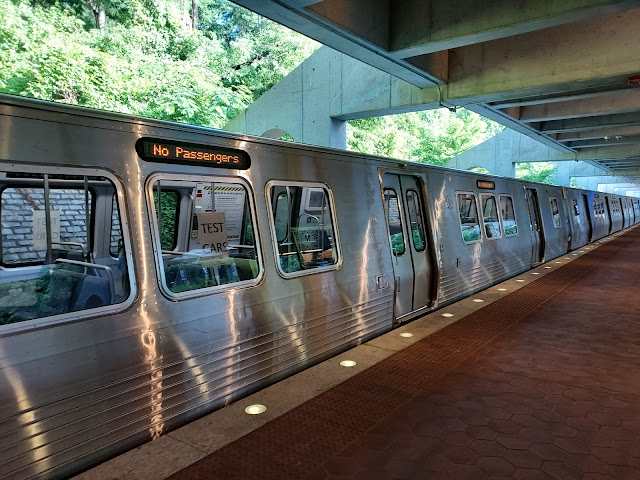 There are days, when I just want to ride around town on the subway trains and watch the people.
People can be interesting. There was the person who rode to and from my home station who had a some health issues.  She would start arguing with no one. She got off the train one afternoon at the Pentagon Station and stood on the platform baying, like a wolf at the moon.  The doors closed and the train pulled out and she was not done, she must have waited for the next train, for the moment to pass.
There was the time the train stopped, I was sitting in the front car.  The operator opened the door, grabbed a fire extinguisher, rushed ahead about 100 feet and put out a trash fire on the tracks.  Five minutes later we were on the way to our next station.
There was the morning we pulled into L'Enfant Plaza station, with a short hold for single tracking through the station.  I looked over and there was a dead passenger covered in a sheet on the train parked in the station, surrounded by police and medics.  I later read that he died on the train, probably of a Monday morning heart attack.  Metro put in a policy that the operator must walk the entire train when the train is going out of service, aka being parked for the day, after someone died of a rush hour heart attack in the morning, the train was parked in the sun all day, and the remains were found when the train pulled into the first station for the afternoon rush.  Clean up in car 6.
I read a lot on the train, I love my reading time on the trains, it was one thing I really miss when working remotely.  But there are a few spots along the way that always make me look up.  The train passes National Airport, I look up to see the planes, especially the private aviation terminal at the end.  The train crosses a bridge over the Potomac River, I look up going in I look up to see the silhouette of the city, coming home the view is of the River and the airport.
Why No Passengers on the train above.  Metro is doing safety testing trying to get the 7000 series trains back in service, they have been off the rails since October of 2021.  The train wheels are pressed onto the axles, and there is a somewhat rare, but potentially disastrous defect that allows the wheels to move out on the axle. It happens slowly, and if caught can be repaired or replaced before it is dangerous.  They have installed sensors in the tracks to measure for this, and they need to drive the trains back and forth over the sensors to prove that they will detect the problem when it happens.   The 7000 series is 60% of metros rolling stock.  Service is at about half capacity. 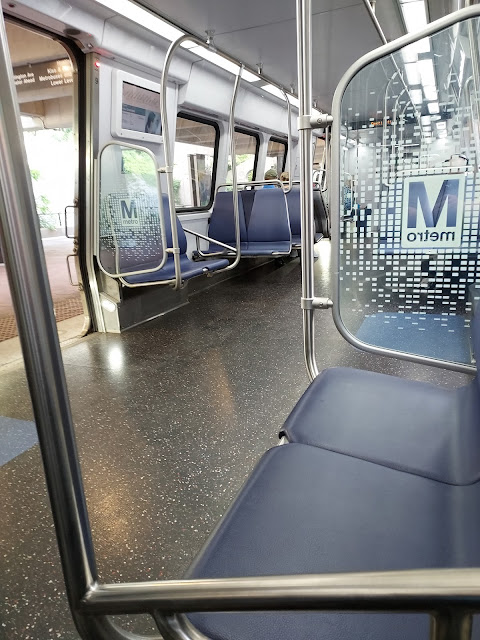 Update, testing has been completed on 64 cars and they have returned to service.  Welcome back my old friends!
Posted by Travel at 12:00 AM