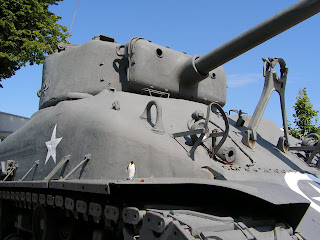 There aren’t enough battle fields here in the United States. The ones we have are from the Revolutionary War and the Civil War. Wars that are distant in time. Memories of which are faded.

Sunday is Veteran’s Day here in the United States. A day set aside to honor all of the men and women who served in the military, those who lived to return home and those who did not. Traveling in France this summer I renewed my love of the country and the people. In doing so I realized why invading Europe at the end of World War II was worth the price. We truly returned freedom to wonderful places and people, people who truly saw us as a liberating force. I also came to realize the magnitude of the undertaking and the number of people who were injured or died to free Europe from a government that put ideology and national policy ahead of fundamental human freedoms, including the right to live.

Traveling to the battle fields I better understood why. Why we fought a war. Why the war was important to the history of civilization. Why honoring those who served in the wars is important. As Americans we need to travel more to understand what it is that we do when we send our military off to fight wars, and why we do it.