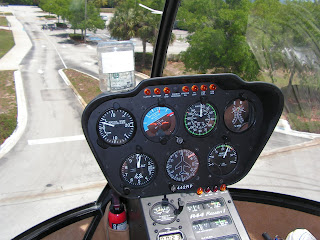 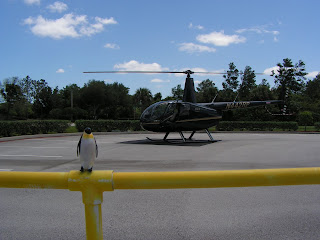 Who says penguins are flightless! This little penguin rather enjoys jetting around various parts of the civilized world. I grew up in little single engine airplanes and have flown literally hundreds of hours in low and slow flying aircraft. But this, this was different. I had never been in a helicopter before. I finally had the opportunity to take a ride with a scenic view of the Kennedy Space Center. Frankly I wouldn’t have cared if the view had been of a garbage dump; the opportunity to ride in a helicopter was enough for me to say yes and plunk down about $11 a minute. The take off was gentle and really took me by surprise. There was a slight increase in noise, a very slight vibration. We levitated up, rotated and floated over the hedge and the street (it was really quite magic and I am pretty jaded.) Within seconds we were a couple hundred feet in the air, passing over buildings and out over the Indian River. We went east along a causeway, climbing to about 3400 feet, turned north for a spectacular view of the Space Center including the shuttle launch pads and three mile long shuttle landing strip. We could see cruise ships docked in the harbor 20 miles away (great day for flying.) We turned back toward the mainland and worked our way back south reaching speeds of nearly 150 miles per hour (the red line speed for the little chopper.) We came in low and fast over the waters edge with the tops of the pine trees swaying below us, leveled out and settled even more gently then we had ascended into a landing zone barely larger then an SUV. It was wonderful. Daddy needs to win the Power-Ball so I can travel like this all the time. This is what flying was suppose to be like.